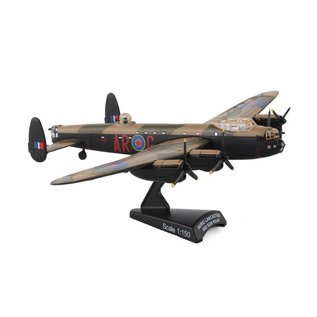 C$47.99 Excl. tax
Brand:
DARON
DARON DAR PS5333-1 AVRO LANCASTER 1/150 DIECAST
POSTAGE STAMP COLLECTION
PS5333-1
POSTAGE STAMP AVRO LANCASTER RAAF 1/150 G FOR GEORGE
"G for George" is an Avro Lancaster Mk I bomber, squadron code AR-G and serial number W4783, operated by No.460 Squadron RAAF during World War II. It is now on permanent display at the Australian War Memorial in Canberra, Australia.
"George" flew almost 90 combat missions over occupied Europe with No.460 Squadron, and its second most prolific surviving Lancaster, behind "S for Sugar" of No. 467 Squadron RAAF (137 operations). Most operational Lancaster were shot down before they had reached 20 operations.
Upon its retirement from combat duty in 1944, "George was flown to Australia by an all-RAAF crew of Bomber Command veterans. The bomber played a major part in raising War Bonds during a round-Australia publicity trip. After the war, it stood in the open air at RAAF Base Fairbairn, its fate uncertain, before being moved to the Australian War Memorial in 1955.
This Die-cast metal airplane model comes in 1:150 scale with plastic stand and is approximately 5.5 inches long with 8 inch wingspan. 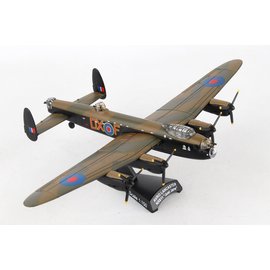 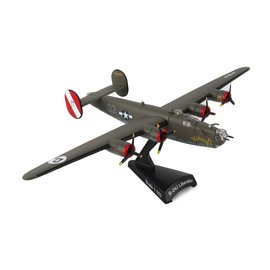