THE BOX CONTAINS TWO MODELS
PLEASE NOTE: This is an unfinished model kit which requires assembly, paint and adhesives 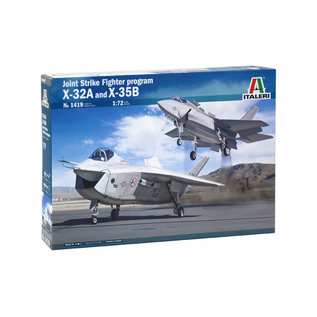 During the ‘90s  the United States Department of Defense launched the JSF (Joint Strike Fighter) contest to assign the production of a new 5th generation Multi-role combat aircraft. Boeing participated to the contest with the concept demonstrator aircraft X-32 while Lockheed Martin presented its XF-35 prototype. The Boeing X-32 was developed and realized around a large one piece carbon fiber composite delta wing and characterized by the big size air intake placed under the cockpit. The Lockheed Martin reply was based on the XF-35, using a lot of technology and aerodynamic solutions already successfully adopted on the fighter F-22 Raptor. For both concept demonstrator aircrafts were developed several applications as the conventional take-off / landing version and the STOVL (short take-off and vertical landing) version. On 2001  the Department of Defense announced that the Lockheed Martin X-35 won the JSF competition and from it the new F-35 Lightning II was born.