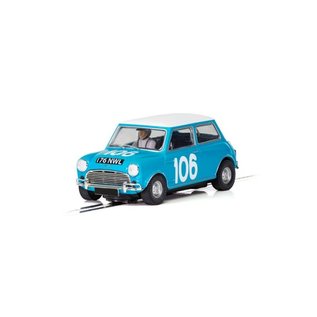 Despite not finishing the 1962 Targa Florio, the little Mini of Prince Paul Metternich and French motor racing photographer Bernard Cahier grabbed not only the attention, but also the hearts of the Sicilian crowd. Using a set of tyres every lap, the Mini also lost second gear and its pace dropped to the point where it was unclassified. However, by its last lap the car had gained such affection that the crowd were throwing flowers down in its path, cheering it to the finish. Number: 106
Race: Targa Florio
Year: 1962
SCALE 1:32